Traditions are a part of every wedding.  How many of these will you do?

Something Old, Something New, Something Borrowed, Something Blue, a Sixpence in your Shoe.
This Old English rhyme set the foundation for one of the most popular wedding traditions among brides. Something old represents continuity, something new optimism for the future, something borrowed is borrowing happiness, something blue represents purity, love and fidelity, and the sixpence is for prosperity. Some brides combine objects, such as a borrowed, blue ribbon tied around her leg and dimes are often substituted for sixpence.

A White Wedding Dress
This is a fairly new tradition. Brides once wore their best dress, no matter what the color. Diverse colors went in and out of fashion.  In 1840, Queen Victoria wore a white dress, not to represent purity and wealth as commonly thought, but because it was the cheapest fabric available – it didn’t need to be dyed.  That did it!  White and ivory dresses continue to be the most popular wedding dress colors in America today.

The Wedding Ring
The wedding band is a traditional symbol of marriage. Wedding rings are mentioned in writings from ancient Egypt and early Roman times. The band is worn on the third finger of the left hand because both ancient Romans and Egyptians believed that a vein named vena amoris (love vein), ran directly from that finger into the heart. 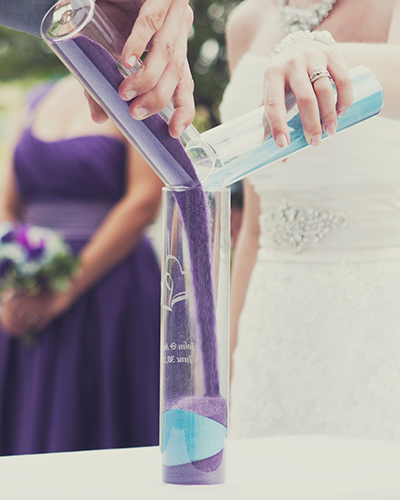 Bridesmaids & Groomsmen
Every bride and groom wants their best friends and family members to be present when they say “I do.” These days your attendants are there to support you and wish you well, but in Roman times, the bridesmaids dressed exactly like the bride to confuse evil spirits or enemies from kidnapping the bride. The groomsmen were on hand to abduct an unwilling Bride and drag her to the ceremony.

The Wedding Kiss
The phrase “you may now kiss the bride” typically signifies the couple is officially married and the ceremony is over. This tradition originated in Roman times when legal contracts were sealed with a kiss.

Throwing Rice
This tradition also goes back to Roman days when coins or seeds were tossed out to wish the newly married couple good fortune.  Today, guests are more likely to blow bubbles or throw birdseed as the couple leaves the official ceremony.

Lighting a Unity Candle
Another recent tradition is the unity candle. It symbolizes two people coming together to form one family. This tradition can be customized to fit the setting, such as pouring sand into a vase for a beach wedding. In many second marriages, the couple may decide to include their children in the unity ceremony.

The Bridal Bouquet
A bouquet of flowers is a wedding accessory that complements the bride’s dress and wedding decorations.  The bouquet may be an elaborate arrangement to a single stem. Originally the bride carried flowers or a spray of herbs to ward off bad spirits and mask odors. Eventually the tradition expanded with unmarried ladies invited to try to catch the bouquet, signifying that they would be the next to get married.

The Garter Toss
Much like throwing the bouquet, the single man who catches the bride’s garter is believed to be the next to marry. This activity originated in the 14th century when it was considered a sign of good luck to have a piece of the newly wedded couple’s clothing.

Wedding Cake
Thank the Romans again. The wedding cake is a sweet ending to the wedding dinner or reception today, but the tradition began years ago when a small cake was broken over the bride’s head to encourage fertility. Guests picked up the crumbs and kept them for good luck.

Other photos via Bri Johnson Photography ©

Before you plan the lighting for your wedding, realize no two weddings are alike. Some people choose to have more subtle lighting while others…